History of a Beerstile by Ulrike Genz  and Andreas Martin A total of up to one million hectolitres of Berliner Weisse were brewed in the beer style’s heyday in the 19th century. The Weisse beers were not only consumed in beer gardens, but were part of everyday life. The reason being that the quality of drinking water often left much to be desired. Poorer folks picked up the Beriner Weisse in a bucket and took it home to let it mature. On the other end of the spectrum, beer traders distributed them worldwide and in the elegant Weisse beer salons of the upper classes vintage Weisse – a Berliner Weisse that had aged for several years – was slurped from fine crystal goblets. 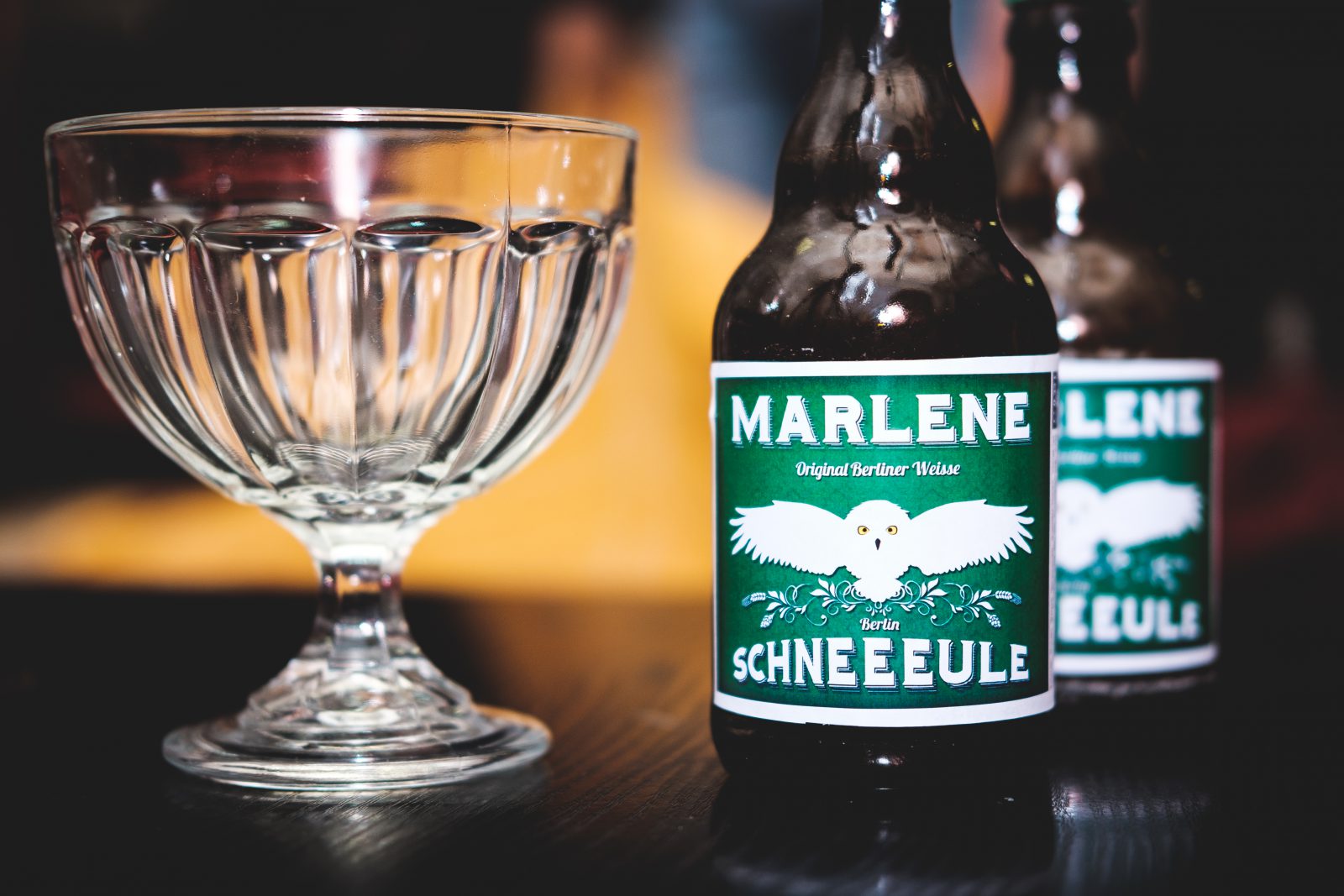 Berliner Weisse is a lactic fermented draught beer with an original gravity of only 7-8°Plato and low alcohol content (3-4% alcohol by volume). Traditionally, fermentation takes place in the bottle using Brettanomyces secondary-fermentation yeasts. There are various notions about the historical origin of the Berliner Weisse. But they are all closely interwoven with the history of Berlin. The Huguenots After the 30-year war (1618 -1648) and the subsequent plague outbreaks and famines, the population of Berlin had been reduced to less than 10,000 citizens. To counteract this, Frederick the Great issued the “Potsdam Edict of Tolerance” in October 1685, thus laying the foundation for the immigration of up to 20,000 Huguenots to Brandenburg and Berlin. They were discriminated against because of their Protestant religion in France. The immigrants not only brought their language and culture with them, but many of them were also urgently needed craftsmen who helped to revive the city. In contrast to the Jewish and Bohemian immigrants, the Huguenots were not subject to any restrictions in the exercise of their profession. Brewers of French origin soon began producing a light wheat beer.

In a publication entitled “Vollständiges Küch- und Keller-Dictionarium” (Comprehensive Kitchen and Cellar Dictionarium) published in Hamburg in 1716, this beer was described as follows: “A good, healthy beer very similar to Breyhahn that is brewed with barley and wheat malt.”

One of the most important Weissbier breweries was founded in 1741 by the Landre family. This family of French immigrants would have a decisive influence on the development of Berliner Weisse through 1917. At that time, wine was also cultivated on a large scale in Berlin, as street names such as Weinbergsweg still testify today. Unfortunately the quality of the Berlin and Brandenburg wines was not suitable for champagne production, so the French immigrants used the barrels they brought with them and applied their knowledge of bottle aging to the beer brewed in Berlin. 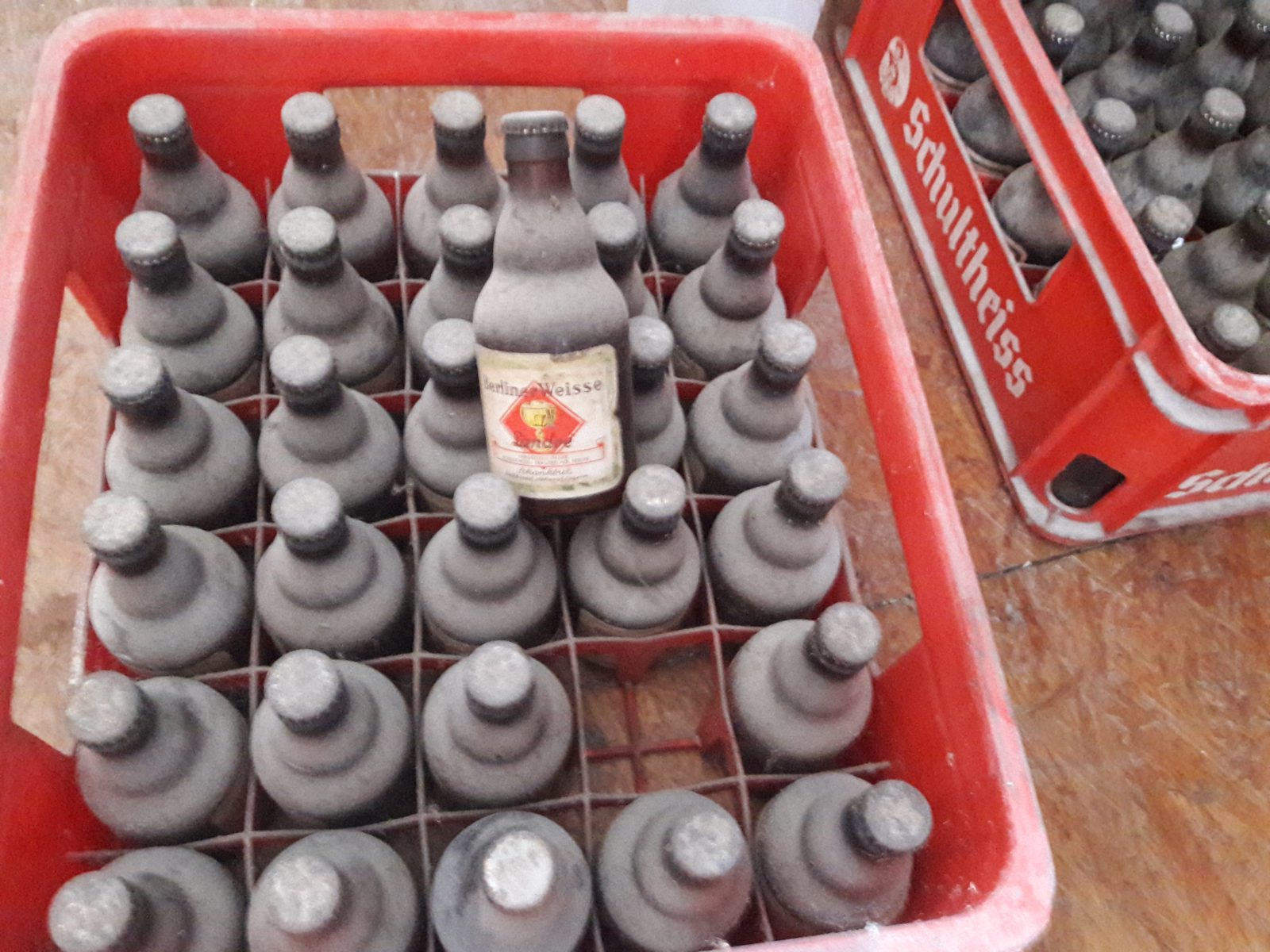 Broyhahn beer The beer in Berlin, however, was already slightly sour before the Huguenots arrived. At least that’s what the legendary Broyhan script suggests. This writing consisting of records of the legendary master brewer Cord Broyhan (✝1570) and mentions different procedures for saving beer that was sour. Here is a description of how an experienced master brewer saved a “sour” beer, which was probably Lactofermented, by boiling a hop brew and blending it with the initially sour beer and adding new fresh yeast. Today, every brewer today knows that hops have an antibacterial effect. So the addition of hops stopped the proliferation of lactic acid bacteria, but a sour taste was left behind that apparently seemed so normal that this beer was thought to be “refreshed” and “clear and tasty again”. A bit of brewing advice provides another reference to Broyhan’s sour taste: “If a beer has a taste of the barrel, place a hot, split piece of barley bread fresh from the oven over the tap hole, let it cool down: if you repeat it three or four times, all bad taste will be gone”. The “barrel taste” that is mentioned is an indication of a Brettanomyces infection. This yeast lived primarily in the wooden barrels used for fermentation. By acidification with the lactobacilli from the fresh bread, the Brettanomyces taste that had become too intense could be hidden and the beer could be made to taste as usual. 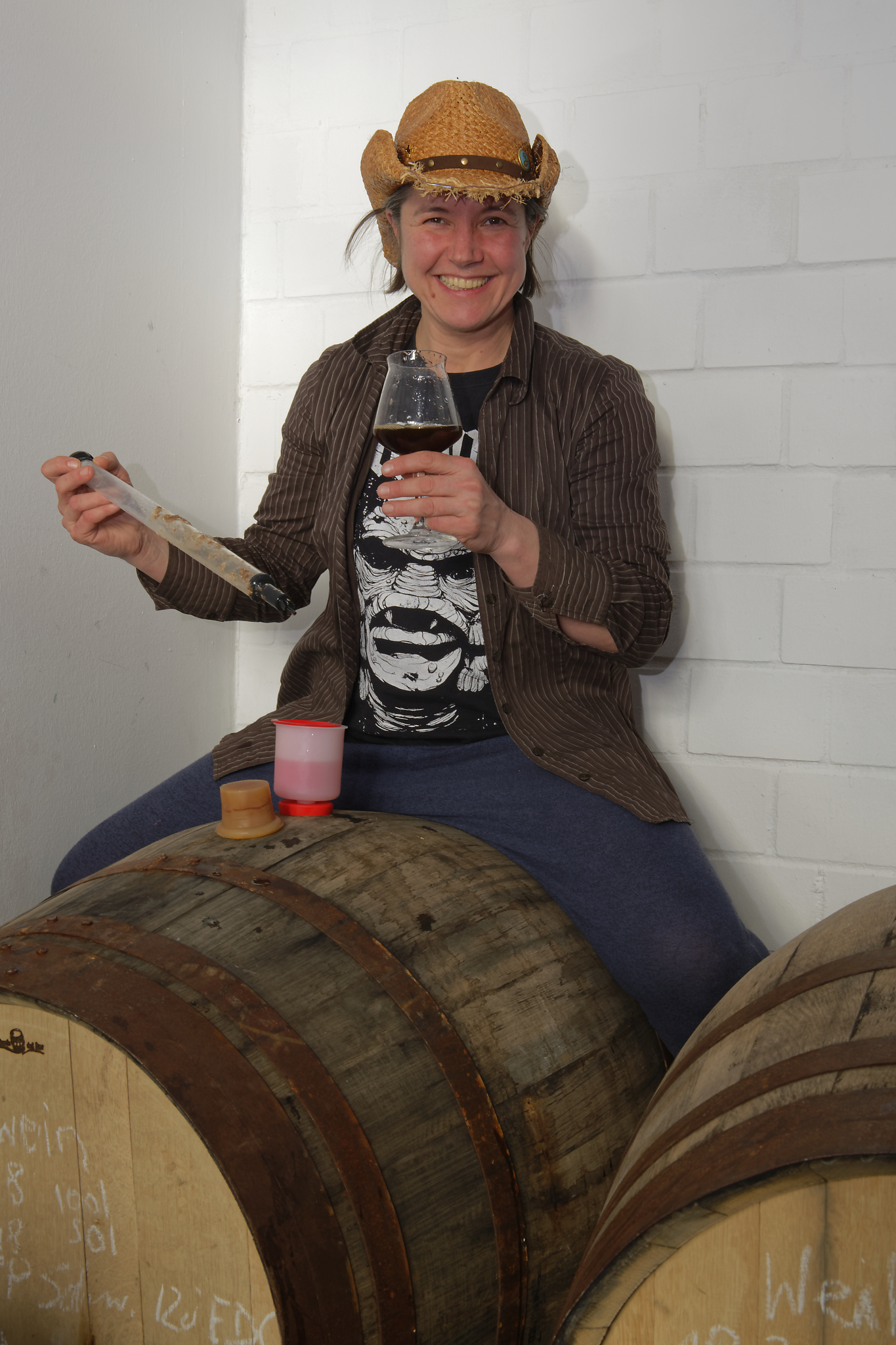 It is only logical that a combination of both theories ultimately led to the emergence of the Berliner Weisse. The slightly sour beer was fermented in the bottle in the “Champagne fashion” with the help of Brettanomyces yeasts. Only the bottle fermentation with Brettanomyces yeasts gives the Weisse its exquisite perlage and clear yellow colour, just like champagne. The heyday Already from the time of the Napoleonic occupation of Berlin at the beginning of the 17th century it has been reported that the soldiers of the French emperor appreciated the Berliner Weisse very much. So much in fact, that they began calling “Champagne du Nord”, meaning “Champagne of the North”. But Berliner Weisse experienced its great heyday in the middle of the 19th century. More than 1 million hectolitres were produced in the city by more than 50 breweries. A very special culture of beer indulgence developed in the up to 700 taverns serving the drink. At the end of the century, modern production technology ensured stable quality and ultimately the emergence of brands such as Landré, Gabriel & Jäger, Breithaupt and Willner. The barkeepers in the Weisse establishments – equipped with a special pouring devices – considered themselves to be artists who were particularly good at pouring the frothy drink. A Weisse beer that had matured up to 11 years was endearingly called “One from the board” (meaning one from the shelf) and also went by the names Edelweisse, Champagnerweisse or Rieslingweisse. There were also Weisse “Vollbier” beers with higher original wort or stone or sand Weisse beers, which were buried in the ground for several months or even years in large earthenware vessels called “Kruken”. The Kruken were also popular with allotment gardeners in Berlin. In autumn on the last day in the garden they were buried and in spring during the first weeding activities they were taken out to be enjoy the beer that had been ageing over winter. The Weisse was often drunk with a caraway schnapps called “Strippe”. The addition of sweet syrups was only common when it was given to children, who, like adults, drank some Weisse beer almost daily. Towards the end of the 19th century this practice also became more and more popular with adults, especially to mask the taste of what was called a “Nullweisse”, a Weisse that was far too sour but was usually cheaper. The Weisse was mostly produced in two stages until around 1930. Breweries specialising in wheat beer produced the wort and mixed it with a culture and let it ferment. The resulting “young beer”, the product after primary fermentation, was then filled into barrels and transported to the Weisse beer makers’ facilities. Here the wort supplied by the brewery was blended with longer-fermented beer and stored in bottles or Kruken – 2-litre earthenware vessels – for fermentation. Poorer citizens collected the beer in 10 litre buckets and fermented it themselves at home.

„Eine vom Brett“ (bedeutet: eine aus dem Regal) nannte man die bis zu 11 Jahre gereiften Weißen, diese wurden auch Edelweisse, Champagnerweisse oder Rieslingweisse genannt.
Es gab auch Weiße-Vollbier mit höhere Stammwürze oder Stein- bzw. Sandweisse, diese wurden dann für mehrere Monate oder auch Jahre in großen Steingutgefäßen sog. „Kruken“ im Boden vergraben. Die Kruken waren auch bei Berliner Schrebergärtnern beliebt. Im Herbst am letzten Tag im Garten wurde sie vergraben und im Frühjahr zum ersten Unkraut Jäten wurden sie wieder herausgeholt und das Bier genossen.   Die Weiße wurde gerne auch mal mit „Strippe“, Kümmelschnaps, getrunken. Das Vermischen mit süßen Sirup war zunächst nur bei Kindern üblich, die wie die Erwachsenen auch fast täglich ihre Ration Weisse tranken. Zum Ende des 19. Jahrhunderts wurde dies auch bei Erwachsenen immer beliebter hier vor allem um den Geschmack sogenannter „Nullweiße“, viel zu sauerer Weiße, zu übertünchen, die es meist etwas günstiger gab. Die Herstellung der Weiße erfolgte bis ca. 1930 meist zweistufig. Die auf die Weissbierherstellung spezialisierten Brauereien produzierten die Würze und stellen diese mit einer Mischkultur an und ließen sie angären. Das so entstandene Jungbier wurde dann in Fässer gefüllt und zu den sog. Weissbierverlegern transportiert. Hier wurde die von der Brauerei gelieferte Würze mit länger vergorenem Bier verschnitten und in Flaschen oder Kruken – 2 Liter fassende Steingutgefäße – zum Vergären eingelagert. Ärmere Bürger holten sich das Jungbier in 10 Liter Eimer ab und vergoren es zuhause selbst. The decline The Weisse began to fade with the rise of brown beer, which was much easier to produce since it didn’t require bottle fermentation. The increase in beer tax in the run-up to the First World War and massive increases in the price of raw materials during the war marked the beginning of the end. There was another massive spike in the consumption of Weisse at the beginning of the war, but this was short-lived as the fighting raged on. The invention of modern refrigeration technology towards the end of the 18th century also made it possible to produce bottom-fermented beer known as “Braunbier” all year round. This beer was much easier to produce as there was no need for time-consuming blending and bottle fermentation. That meant the beer could be sold at a cheaper price and so it began to enjoy ever greater popularity. Following the disastrous revolution of 1848, the Berliner Weisse was also regarded as the drink of the conservatives and monarchists, and the revolutionaries, quite subversively, turned to modern Pilsen beer. Around the middle of the 19th century, the quality of Weisse beers began to drop more and more. In 1873, the periodical “Der Bierbrauer” criticised the poor quality of numerous Berlin beers, saying they were “hardly fit to drink”. The reasons may have been manifold. The city was growing and some brewers may have started brewing in large quantities, neglecting quality. Perhaps even the tap hygiene of some restaurants was not conducive to the beer with its special yeast cultures. Frequently reused wooden barrels that were already contaminated with various cultures might not have been exactly favourable for the quality of the beer. At the beginning of the 20th century, when taxes on beer were increased, many of the smaller breweries were no longer profitable and had to close or were scooped up by larger competitors. The First World War, the Great Depression and the almost complete destruction of Berlin towards the end of the Second World War almost caused the once radiant Berliner Weisse culture to fade into oblivion. In 1940 there were only 10 Berliner Weisse breweries left in the city. By 1970 there were only three in west and just one in east Berlin. After all the major breweries (Schultheiß, Kindl, Willner, Bürgerbräu etc.) were taken over by the Radeberger Group in the late 1990s, Berliner Weisse was still produced in Berlin under the “Berliner Kindl” brand. But this is a merely a “kettle sour” which is not bottle fermented using Brettanomyces. Restart